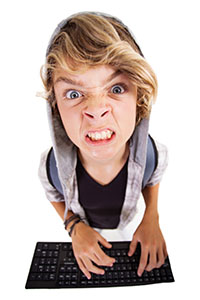 Nobody said raising a teenager would always be easy. Some children go through the normal acts of rebellion, which most of us go through, but others cross the line and head down the wrong path. As parents, we need to be both understanding and constantly be on the lookout for warning signs. Below you will find 4 warning signs of a troubled teen.

Your teen starts showing signs of being antisocial. If you notice that your teenager is spending an abnormal amount of time secluded in their room and not wanting to participate in family activities, such as eating dinner together, watching movies, attending any family outings, or engaging in conversation, there could be an issue that needs to be addressed. They might also show signs of not wanting to interact with non-family members or limit their circle of friends to others who tend to be more antisocial.

It’s not uncommon for a teenager to go through spurts of rebellion. This is perfectly normal because they’re trying to find out who they are and to do so, they must reject the opinions of authority figures in some ways. However, there is a difference between the embrace of individualism and chronically defiance. If your teen refuses to listen to anyone, even when they obviously know that others are acting in their best interests, you have may have a troubled teen. A normal teenager will alternate from being receptive and compliant to rebellious. When they realize that their rebellious behavior was taken to the extreme, they will apologize.

Your teen becomes destructive to their self, property or others. Teenagers are trying to adjust to their changing hormones and have difficulty controlling their anger. Every person goes through this change. However, if your teen often engages in dangerous activities, is destructive, or becomes violent to others, then there is an issue that needs to be resolved. The occasional outburst does not mean you have a troubled teenager, however, a routine habit of expressing anger does.

Your teenager has been participating in criminal behavior. If your teen is driving while intoxicated, taking drugs, stealing money from home, or from others then you should take action. At this age your teen is developing many of the traits that will define them as an adult. By allowing these type of activities to continue, your teen could make mistakes that permanently affect their life and potentially result in prison or death. This needs to be addressed before it becomes a permanent lifestyle.