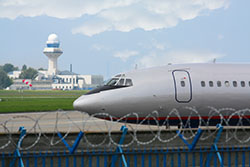 Airport Security and PSIM Solutions are something of growing concern. When traveling, the security and safety of our families is the most important thing to us and it’s something that some airports seem to be struggling with.

In March, an accused rapist bordered a flight for London at John F. Kennedy Airport with a powerful weapon tucked away in his carry-on luggage. The weapon was a powerful 3,800-watt stun gun. This is possibly, the same weapon he allegedly used to subdue his 19 year old victim. The most frightening aspect was that the weapon made it through airport security and onto the plane. It was only discovered later during inventory after he was taken into custody at the request of New York City’s special victims unit. While stun guns are allowed to be transported in checked baggage, they are prohibited from being in carry-on luggage.

You might also recall hearing about the stranded jet skier who breached JFK Airport’s $100 million dollar security system. The man, who became stranded 3 miles from shore, swam until he reached land. At which point, he was faced again with the problem of being stranded. Only this time he was stuck on the outside of the airport’s 8 foot fence which was designed to keep out terrorists. With no other option, the man climbed the fence and walked across two runways, soaking wet and dressed in a bright yellow life vest, to a tarmac just outside the terminal. Not even thinking about the fact that he had just breached a $100 million security system and strolled completely undetected by motion detectors and closed-circuit cameras, he walked up to an airport employee to ask for help. It wasn’t until this point that he was “noticed” and authorities took him into custody for criminal trespassing.